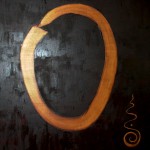 The essential teaching of Buddhism is to embrace impermanence and the Vista Zen Center is certainly not immune to the winds of change. In 1986, Nicolee Miller, as she was known then, and Jake Gage formed a sitting group in Jake’s home in Vista. Little by little word spread about this cool laid-back meditation gathering that met twice a week and before long enough people were coming that retreats and service became a part of the program . 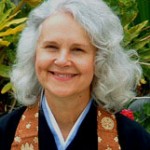 In 1987, the name JoRen was suggested by Maezumi Roshi and was quickly adopted by the community. JoRen grew slowly, but the core of students were dedicated and Nicolee began to give interviews in the early 90′s to help students along the way. Nicolee’s life not only afforded her more time to study with Maezumi Roshi, she was able to attend many of the 7-day retreats. In 1995, the year of Maezumi Roshi’s passing, Nicolee was made a dharma successor and given permission to teach.

Jake Gage was ordained as a priest in 1996 and with retirement from school administration only a few years away, he made strides to complete his own training with Nicolee as his guide. Also, Nicolee married Barry McMahon in the late 90′s and adopted the name Nicolee Miller-McMahon.

With the center now focused on a more traditional Zen training and with more and more students coming to practice zazen, in the late 90′s the group decided it was time to become a legitimate Zen Center and filed the necessary documents to become the Three Treasures Zen Community. 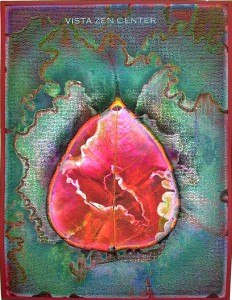 Shortly after the 9/11 attack in 2001, Nicolee decided to centralize her teaching to her own home temple in Rancho Penasquitos and the two sitting groups continued to practice together as TTZC.

Jake was made a dharma successor in 2003 and continued to be a part of the Three Treasures Zen Community until 2006 when he felt it was time to separate and implement some teaching ideas and techniques of his own. He also adopted the new name, Vista Zen Center.

In 2009, Nicolee installed Jake as the abbot and the center became Hotei Temple, but continues to use the Vista Zen Center name for clarity purposes. Jake was given the title Roshi by Jikyo Roshi in a 2012 ceremony.

There are no in-person meetings or events at Vista Zen Center at this time. We will meet in person after the pandemic wanes. Please call us if you would like to be invited to our Tuesday and/or Saturday Zoom meetings for zazen and a once-per month talk.

Eyal Raz (To be rescheduled)

During Sesshins, the Center is not open for regular Tuesday and Saturday sitting. Sesshins are open to full and part-time attendance, but there is a limit to the number of attendees we can accommodate. Please contact Shinkai to register for sesshins: gculp927108@gmail.com